Vaishno Devi is a temple town that’s home to the famous Vaishno Devi Mandir. Located in Trikuta hills, 13 kms from Katra (in the union territory of Jammu and Kashmir); this renowned shrine allures millions of devotees from all over the world. Popularly known as Mata Rani, Vaishnavi and Trikuta, Vaishno Devi is a manifestation of the Hindu Goddess Durga. It is believed that during the pooja and aarti, Goddesses arrive at the Holy cave to pay their respect to Mata Rani. Devotees believe the goddess herself calls the devotees to reach here.

Vaishno Devi is said to be Moonh Maangi Muradein Poori Karne Wali Mata (the mother who fulfils the wishes of her children). The darshan of Maa Vaishno Devi in the holy cave is in the form of three naturally formed rocks which are known as pindies. These pindies manifest the three forms of the goddess as Maha Kali, Maha Saraswati and Maha Lakshmi. More than one crore devotees visit the Vaishno Devi temple each year. 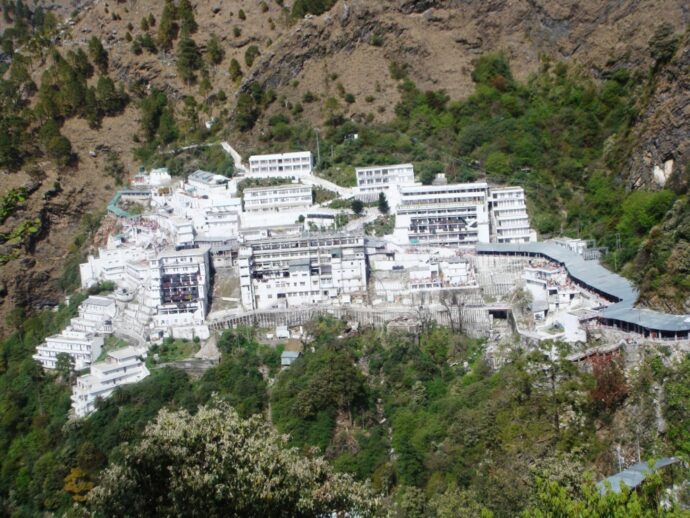 Summer (March to June)
The best time to visit Vaishno Devi is undoubtedly in the months of May, June and July. While days are quiet, by evening the temperatures cool down considerably. It is a pleasant time to go for darshan during this period. It is recommended to carry light woollens, because even though the summer weather remains cool, you may experience evening cold because of the high altitude. These are also the months when the crowd is relatively less.
Autumn (October & November)
These are the peak months for Vaishno Devi darshan because of the festivities. Navratri and Dussehra which celebrates the power and glory of Goddess Durga/Chandi experience maximum footfall of pilgrims. The chant of ‘Jai Mata Di’ fills the air as people surge on for a glimpse of the Devi. It is also the time to enjoy the stunning beauty of the surrounding landscape.

Monsoon (July to September)
Monsoon is the best time to explore the beauty of the terrain. With the area receiving moderate to heavy rainfall, there is lush greenery all around accompanied by cascading waterfalls. However, it is risky to undertake a Yatra during these months because of the risk of sudden mudslides. But since it is off season here, budget travellers can find hotels at low cost.

Winter (December to February)
By virtue of being located at a high altitude, Vaishno Devi experiences heavy snowfall during the winter months. Unless you are travelling with aged people and kids, tourists can attempt a visit during this period as it is quite an experience. The Holy Cave remains open and despite the sub-zero temperatures, one finds pilgrims making their way through the snow for a visit to the Holy Mother.

These are other trips.

Jammu, Katra, Mata Vaishno Devi 3 Days
"We are passionately dedicated to general first-rate travel, with chronic transport of price brought services. We uphold the very best moral requirements and trust in...
View Details
Available through out the year:

Jammu, Katra, Mata Vaishno Devi 3 Days
"We are passionately dedicated to general first-rate travel, with persistent transport of cost-introduced services. We uphold the very best moral requirements and trust in developing...
View Details
Available through out the year: