Amidst the most beautiful scenic place on the earth during the fascinating Badrinath Yatra to the lofty hilly cliffs, curves and terrains. Badrinath Dham is one of the most sacred abode of god situated at a great height of lofty Himalayas in the hilly tracks of the Garhwal. The Badrinath Dham is located at the height of 3133m above the sea level.

You will find the numerous breathtaking pilgrimage sites such as Deo Prayag, Nandaprayag, Rudraprayag, Karnaprayag, Vishnupyarag during this fascinating Badrinath Yatra. Pandukeshwar is also the most sacred pilgrimage site. It is believed that Pandavas had stayed here during their pilgrimage to heaven, the king Pandu was observed Doing Penance with his queen Madri, and it is also the place where Hanuman and Bhima met. It is believed that the Lord Maha Vishnu have done his penance at Badrinath.

The Goddess Mahalaxmi is believed to have considered the form of Badari tree to offer the Lord some shelter to face the foray of the hostile weather conditions after seeing him doing his penance in the open. Thus, the name Badari Narayan. He revealed that Nar & Narayan were the forms of his own to the Narad rishi. It is believed that Narad Rishi who once did his penance here, is now worshipping the Paramount God with Ashtakshara mantras.

The Badrinarayan image here is that of Saligramam. Badarinarayan is seen being surrounded by the Garuda, Kuber, Narad, Narayan, Garuda and Nar. Goddess Mahalakshmi has a shrine outside the parikrama. You will also find the shrine to Adi Sankara during this facinating Badrinath Dham Yatra.

You will find Lakshmi Narsimh mandir behind the Lord Badarinarayan temple surrounded by the Ramanujachary and Desikacharya. Witness the greatest natural wonders in the Taptkund hot water spring situated on the banks of chilled ice river Alaknanda.The temperature of the water in the kund is about 55 degree centigrade. You will experience the 9-10 degree centigrade which remains same for the most part of the year. If you are on the Badrinath Yatra, then must take a holy bath in the Taptkund before visiting the temple.

The Present structure of the temple was built by the kings of the Garhwal. There are three sections of temple – Garbhagriha (Sanctum), Sabha Mandap and the Darshan Mandap.

The image shown here is of black stone representing the lord Vishnu seated with meditative pose. Lord Badari Narayan is armed with Chakra and Shankh rested on the lap in Yogamudra. Apart from these you will find the potraits of Adi shankar, Shri Ramanujam and Swami Desikan. It is believed that Guru-Shishya parampara has been started here.

The best time to visit Badrinath Dham Yatra is in the peak season which starts from May to October excluding the monsoons. Because of the heavy snowfall around all the sacred sites seated in Himalayas of the Garhwal. As a result all the shrines are blocked. Landslides are likely to occur to disrupt your journey.

For any further information about Badrinath Yatra, Explore Tirtha Packages

Lowest rates and exclusive discounts for Groups and fixed departures 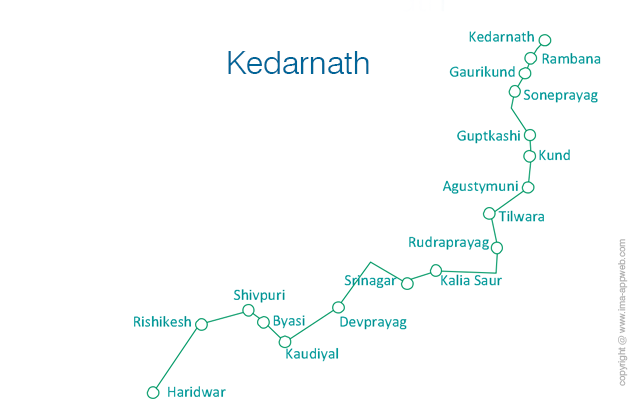